A pipe burst can be a nightmare for any homeowner. You have to clean up the mess, deal with water damage, and hope your insurance company will cover all the costs. Calling Rescue Plumbing for a burst pipe repair will help set your mind at ease.

We’re the plumber who will provide an estimate in a timely fashion.

We offer emergency plumbing services for those times when you need help fast, whether that means fixing leaks or repairing pipes after a burst pipe from freezing temperatures or other causes.

Bursts occur for a variety of reasons, such as natural disasters and aging infrastructure. However, bursts are most often caused by freezing temperatures – this is especially true during Chicago wintertime.

Extreme cold causes water inside of a pipe to freeze and expand quickly which can cause the pipe to burst open at any time.

A lot of people think that their pipes are going to burst because they hear the sound of “gurgling” or see water coming out through a crack in the pipe. If you have this experience, it is best not to ignore it. Take action to reduce water damage turn Off the water to the property and get a plumber on the phone right away!

If you suspect your pipes may have burst due to low temperature, here is what you should do

How To Prevent Bursts

The most effective measures for preventing bursts include checking the connections of your plumbing system regularly, replacing washers when needed, and fixing cracks or breaks as soon as they appear.

Regularly check all pipes and fittings for leaks, breaks, or cracks.

Pay special attention to areas that are subject to movement such as where the pipe bends.

It’s best to do this with a flashlight late at night so you can see better.

If you find any problems, fix them immediately.

Every two to three years, replace the washers that are found at each connection point.

If you have a burst and your pipes are old or they’ve been in use for more than ten years, it’s time to get new washers for all of them!

Fix cracks or breaks as soon as they appear

If you notice any cracks or breaks in your pipes, fix them as soon as possible. The best way to do this is with a repair kit that you can buy at most hardware stores.

During cold winter months, it is recommended that faucets be run at a trickle to prevent freezing. Moving water cannot freeze.

Many customers leave regularly on trips and their homes are left unattended. In this situation, we recommend shutting off the water to your home draining properly, or winterization. Instead of turning off the water, there is another option. We can install a smart electric sensor shut-off valve that could sense a burst pipe and stop the water before causing extensive damage automatically.

Pipe bursts can be fixed by stopping up or repairing the leaky section of pipe, bypassing it with an alternate line if possible, or replacing the entire length of piping.

The damaged pipes are usually replaced with new type L copper piping which can be cut in different lengths for easier installation.

Ruptured or burst pipes require immediate repair to avoid water damage and the spread of mold.

Having a working shut-off valve in your home during a burst pipe scenario is very important. Stopping the water will prevent water damage and allow for easier pipe repair.

A leaky pipe can waste up to 200 gallons of water per day and create an expensive bill at the end of each month, not to mention the risk of flooding or mold.

To avoid leaks and other issues with your pipes and fixtures, make sure that you have a water main shut-off valve installed on all outside faucets to keep them out of harm’s way from freezing.

This job was completed during the evening hours in the Irving Park neighborhood of Chicago.

The customer had just recently acquired this home as an investment property and planned to rent it out in the near future. He purchased the property as-is. He was told that the property had newly installed AC units.

However, whoever installed those new AC units did not seal the opening to the crawlspace. The open crawlspace entrance caused the pipes to freeze.

There was no proper water main shut-off valve to the building so we installed a new main shutoff at a location to be easily accessed.

We fixed the burst pipes.

We had to remove the tile, subfloor and complete a subfloor reinstall.

The customer was ecstatic because we finished so quickly and now he can get a renter in his unit.

If you need help with a burst pipe, we’re here for you.

Our team is ready and waiting to take care of any of your plumbing needs. We can also provide expert advice.

We provide free estimates Monday through Friday between 9 am to 5 pm!

Our plumbers are licensed and insured. They will respond to your neighborhood the same day to provide you with a plan of action.

Call Rescue Plumbing now at (773) 799-8848 for any problems you have! We service the Chicago area and northern suburbs. 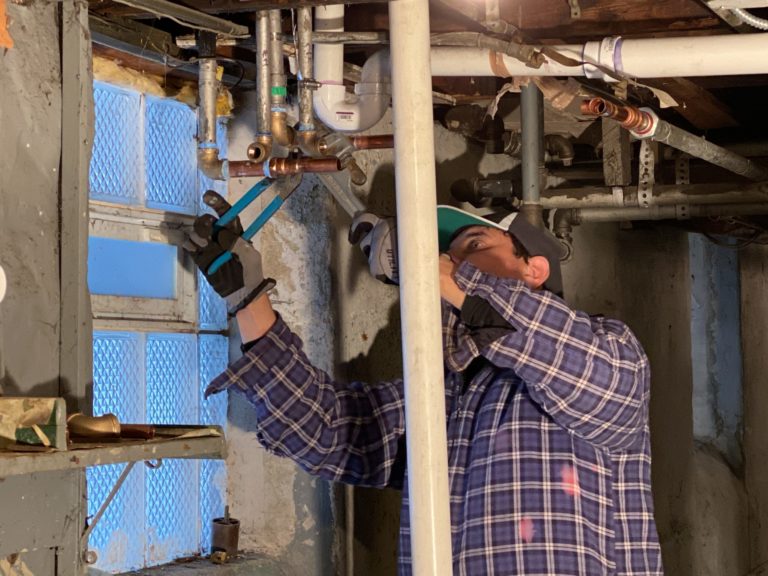